The Ascent of man 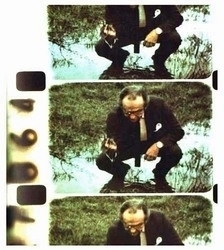 The Ascent of Man Knowledge or Certainty
There are two parts to the human dilemma. One is the belief that the end justifies the means. that push-button philosophy, that deliberate deafness to suffering, has become the monster in the war machine. the other is the betrayal of the human spirit: the assertion of dogma that closes the mind, and turns a nation, a civilization, into a regiment of ghosts - obedient ghosts, or tortured ghosts.
It is said that science will dehumanise people and turn them into numbers. That is false, tragically false. Look for yourself. This is the concentration camp and crematorium at Auschwitz. This is where people were turned into numbers. Into this pond were flushed the ashes of some four million people. And that was not done by gas. It was done by arrogance. It was done by dogma. It was done by ignorance. When people believe that they have absolute knowledge, with no test in reality, this is how they behave. This is what men do when they aspire to the knowledge of gods.
Science is a very human form of knowledge. We are always at the brink of the known, we always feel forward for what is to be hoped. Every judgement in science stands on the edge of error, and is personal. Science is a tribute to what we can know although we are fallible. In the end the words were said by Oliver Cromwell: 'I beseech you, in the bowels of Christ, think it possible you may be mistaken'.
I owe it to my friend Leo Szilard, I owe it to the many members of my family who died at Auschwitz, to stop here by the pond as a survivor and a witness. We have to cure ourselves of the itch for absolute knowledge and power. We have to close the distance between the push-button order and the human act. We have to touch people.
Dr. Jacob Bronowski 1908 - 1974

_This is from the 13 part TV series Bronowski made for the BBC in 1973. It was four years in the making and covered chemistry, astronomy, Newtonian mechanics, the Industrial Revolution, Darwinism and atomic physics, but in the end it was his tribute to humanity and a plea for toleration. In an inspired and moving guesture, at the end of episode 11, when he says 'we have to touch people', he reaches down and scoops up a handful of the slime of Auschwitz.See Bronowski quotes
James Collins Scottish Essays