With Great Reverence, an essay about a Scottish double bass player 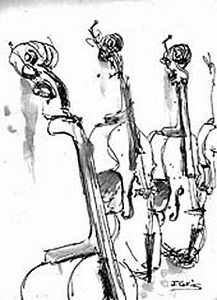 One of the things I meant to do when I returned to Scotland twelve years ago was to look up an old Scottish friend that I'd last seen some twenty years ago in London. In truth I had a whole hatful of ambitions and intentions on my list, and rather to my own surprise and to the utter amazement of my wife and daughter, I've gradually managed to tick them off over the last few years. Alright, I know you can't wait to find out what was on this list, so I'll just run through some of them briefly. First of all, since I was no longer a full-time musician, having developed the guitarists version of tennis elbow, I needed something else to fill my time, and the only other thing I was good at (apart from snooker) was art. I had always painted and sketched, mostly landscapes, although I rarely sold anything.

I had an idea that there was a market for pet portraits if I could reach it, and and the way to do that seemed to be via the internet, so I bought a computer, digital camera, printer etc and hired a local company to design and run a website for me. After a while I realized that it was much cheaper to design your own site, so I thought I'd have a go - how hard could it be, right? Very hard, was the answer, as anybody who has tried it will tell you, but after two years of HTML, jpg's, links, virus's, backache, eye strain and late nights I finally got the hang of it, although as a result of being self-taught I find I'm quite knowledgeable about some aspects of web-building and appallingly ignorant about others.

Another project near to my heart was the search for any survivors of the Scottish side of my family - a side I had lost contact with as a child. This was one of the reasons I'd gone on the internet in the first place, and yes, there were still Collins's living in the Edinburgh area and Cowdenbeath, where I was born.

When I made the trip down to Fife, I met my cousin June, who told me about my dad, who I never really knew, and about my grandad, who was a miner (as all the men in the area were before the mining industry was destroyed by the - but don't get me started). Grandad was known as Tiger Collins because of his red hair. My cousin also told me that I had a half-sister who had been looking for me for years, and was under the impression that I had emigrated to Australia.

I had known that I had a sister but what I didn't know was that she lived just twenty miles from where I used to live in England. I now know there are Collins's across west to Glasgow and probably all the way over into Ireland and down to Dublin in Cork, where all Collins's ultimately come from. I'm also connected to the Donaldsons (my middle name). The Donaldsons or Clan Donald were Lords of the Western Isles at the time of the Jacobite rebellion, but that's a story for another time.

Another idea that I had was to own a collie and after I lost my Patch I acquired a border collie cross called Oscar and we've just bought a rough collie as a companion for him. We call her Daisy May. There are a couple of items still on my list - I can't find a decent snooker club and there are no chess clubs within easy reach, but there is one idea that will never be realized. Lindsay Cooper, my old friend from London died the year we moved up to Scotland.

I found this out recently when I finally got around to making a search on the internet. When I knew him he was the spitting image of 'Animal' from Hill Street Blues - you remember, the little guy with the dark hair and the droopy moustache - except he had the broadest of Glaswegian accents. He played the double bass and also the cello. He played jazz but he also loved Bach.

I'm talking about a time before I'd met my wife. I was very young and, it seems to me now, pretty dumb, but I was lucky enough to be living in a house of bed-sits - or one-room apartments - peopled mainly by musicians. It was run by a little woman called Angie, who was near the end of her career as a dancer. At this time she had a whip act with a guy called Dennis. It was quite a skilful act, as he had to crack this whip around her throat from a distance, and, as she explained it, one little mistake and the whip would throttle her.

Angie liked a drink or two and always wore dark glasses. She did not get on well any more with her partner. I think he had once been more than her stage partner, but now they bickered constantly, like an old married couple. Dennis was a big man with a little goatee beard. He had a soft, whiney voice, like David Beckham but he was mighty strong. I remember once giving Angie a lift in her minicar (she didn't drive), after they had had a row. He came out of the house and stood in front of the car to make it stop and then twisted off the wing mirror with one hand and tossed it in the gutter. Then he just ambled off. A nice guy, really, I don't think he ever hit her.

As I said, most of the tenants were musicians. There was Maggie, who had a great voice and adored Billie Holiday. In fact everybody in the house adored Billie Holiday, except one guy who was a second-hand furniture dealer. There was George, another bass player, who, on being hauled up in front of the captain of a liner when he was working on a cruise, stood eyeball to eyeball with him and told him that he (George) was just as good at his job as the captain was at his. He probably was, too.

Then there was Kenny Vick, who was a jazz guitarist. He was very fastidious and tidy, and would follow you about the room, picking up any bits of fluff or crumbs that you might have dropped (a trait he shared with my mother). He was a great player though.

I learnt from all these people (with the possible exception of the furniture dealer, who nobody liked anyway), but the one I remember most is Lindsay Cooper. I remember playing flamenco in a pub while he read Frederico Lorca poetry in English (his idea) and I remember him dragging us all down to a music shop which had a sale on. He insisted that I buy a book of Bach's partitas and sonatas for violin. I couldn't afford it but I bought it anyway. I still have it on my bookshelf, and I would never part with it.

We used to get together in someones room about once a week to talk about whatever came into our heads. One time the talk turned to South Africa. (This was long before the end of apartheid). The conversation was animated as usual. Everyone had something to say except Lindsay, who said nothing for about half an hour. Finally the talk died down and everyone looked at Lindsay expectantly. He said nothing for a while, then cleared his throat. "South Africa's a turnip". There didn't seem anything to add to that.

Although he had a love of classical music he wasn't a great traditionalist. He thought that the past was sometimes a hinderance to creativity. I didn't have his bold, fearless approach then, and I haven't got it now. I remember asking him, at one of our gatherings, how he could ignore something like the paintings of Rembrandt and he said he would get rid of them. I asked him how, and he said he'd burn them. Nobody said anything. Lindsay looked around, noticed the stunned silence and hastened to make amends. " Oh, but with grrreat rrreverence", he said in his broad Glaswegian accent.
Rest in Peace, Lindsay.