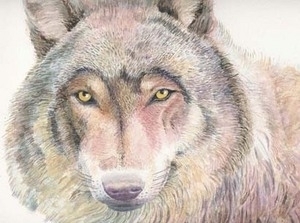 'Man must treat the beasts of this land as his brothers. What is man without the beasts? If all the beasts were gone, Man would die from a great loneliness of spirit. For whatever happens to the beasts, also happens to the man. All things are connected.'
( Chief Seattle Speech of 1854)

Most people are now aware that we have some serious environmental issues facing us in the next few decades. The recent tsunami in Indonesia was a tragic reminder of the fragile balance of nature. There is nothing much we can do to stop these kind of events happening, except to install early warning systems. But global warming can be stopped or slowed down if and when we stop using fossil fuels and turn to renewable energy sources. The technology is being developed or already exists; wind and wave power, hydrogen fuel and nuclear fusion.

What can never be reversed if we let it happen is the loss of the diversity of life on our small, green and blue planet. The list of endangered species is growing all the time. Environmental awareness has been a long time coming. In a way we are the victims of our own success, at least in the West. Population growth makes it ever more difficult to preserve the wilderness areas which are so necessary for the survival of wildlife.

'When I was a boy in Scotland, I was fond of everything that was wild... I loved to wander in the fields to hear the birds sing, and along the shore to gaze and wonder at the shells and the seaweeds, eels and crabs in the pools when the tide was low; and best of all to watch the waves in awful storms thundering on the black headlands and craggy ruins of old Dunbar Castle'.
John Muir

The first modern environmentalists, in a general way, were probably Ralph Waldo Emerson and Henry Thoreau, but the man who made a deep and practical impact was a Scot named John Muir. He was born in 1838 in Dunbar, not very far from where I was born, and he left Scotland for California at the age of twenty-eight. He called himself a 'poetico-trampo-geologist-botanist and ornithologist-naturalist'. Today he is known as the father of America's national parks. On August 5th, 2004, former President Bill Clinton said of him, "One of the Americans who inspired Theodore Roosevelt to conserve our national forests was the naturalist John Muir, who once said, 'Everybody needs beauty as well as bread - places to play in and pray in, where nature may heal and give strength to body and soul'. In today's fast-paced, high-tech world, Muir's words are even more compelling".

Another influential writer was Henry Beston. In 1928, after spending a year in a small wooden house on the Great Outer Beach of Cape Cod, he wrote an inspiring little book called 'The Outermost House', which contained the following passage:

'We need another and a wiser and perhaps a more mystical concept of animals. Remote from universal nature, and living by complicated artifice, man in civilization surveys the creature through the glass of his knowledge and sees thereby a feather magnified and the whole image in distortion. We patronize them for their incompleteness, for their tragic fate of having taken form so far below ourselves. And therein we err, and greatly err. For the animal shall not be measured by man. In a world older and more complete than ours they move finished and complete, gifted with extensions of the senses we have lost or never attained, living by voices we shall never hear. They are not brethren, they are not underlings; they are other nations, caught with ourselves in the net of life and time, fellow prisoners of the splendour and travail of the earth'. Henry Beston The Outermost House

My own special interest is the wolf, that most misunderstood of all animals. Down the ages wolves have been the subject of much fear, hatred and mis-information and yet, of all the larger predators it is the least harmful to people. In a way, we know more about the character of wolves than we do about our closest relatives - the great apes - because their descendants are all around us, lolling about in front of the fire, or digging holes in the garden. And yet the wolf has been hunted and persecuted almost to the edge of extinction. There have been no wolves in Britain for 300 years. The last one was probably killed at Helmsdale, some 40 miles north of where I live in the Scottish Highlands.

That the Vikings had a respect for the strength and sagacity of wolves is evidenced by the names given to ancient Nordic kings - Beowulf, Beadowulf, Wulfstan, etc. Even ealier is the legend of Romulus and Remus. The twins were found abandoned on the banks of the Tiber by a she-wolf, who fed them with her milk. When they grew up, Romulus built the city of Rome on the spot where the wolf had found them. Although no evidence to support the story has come down to us, there are plenty of authenticated stories of similar incidents, including three from Lucknow in India dated from 1844, 1954 and 1976.

One man who was centuries ahead of his time as a protector of animals was the Italian priest who became the patron saint of animals and the environment. Francis of Assisi was very much a lone voice, at one point pleading with the people of Gubbio to feed the notorious wolf which had been ravaging their flocks. His insight was all the more profound considering the relentless cruelty with which 'Brother Wolf', as Saint Francis called him, has been persecuted in the past fifteen hundred years.

In Anglo-Saxon times January was set aside especially for hunting wolves. It was known as wolfmonat or wolf month. Medieval folk-lore is full of stories about devil-wolves with dripping jaws and evil, slitty eyes. There are woodcuts of wolves with cloven hooves, carrying off little children, and there are children's stories like Little Red Riding Hood and the Big Bad Wolf, and various tales about were-wolves. The subject of all these stories must indeed be a ferocious animal, but in fact there is no authenticated instance of anyone being attacked by a wolf. I don't say it couldn't happen; I just say you're more likely to be struck by lightning.

That it is possible for people and wolves to live in the same world has been demonstrated by the various wolf programs on-going in north-west Montana, the Yellowstone area, Central Idaho and North Carolina. There is also a scheme, backed by Greenpeace and various politicians to re-instate the wolf in certain areas of the Scottish Highlands. In the U.S. ranchers are being re-imbursed for any livestock losses - which are surprisingly light - by an organisation called Defenders of Wildlife. This is what they say on their website:

'Some of the nation's most prominent biologists have estimated that protecting habitat for wide-ranging predators such as wolves will conserve 90% or more of overall biological diversity. Because wolves can require home ranges of several hundred square miles, their conservation can help to preserve a host of other species making use of the same habitat.'

It was the 'Defenders' organisation which led the successful fight to restore the gray wolf to it's former habitat in Yellowstone Park, and they are currently battling against recent legislation in Alaska to allow the 'hunting' of wolves from light aircraft and snowmobiles. This degrading and inhumane practice was banned in 1972 until last year, and ignores the weight of scientific thinking. It has received widespread public opposition. Alaskans have voted against aircraft assisted wolf hunting twice; in 1996 and 2000. Killing wild wolves is supposed to boost the numbers of caribou and moose for the benefit of hunters, but biologists say that the larger prey species elude wolves 97% of the time, and that by eliminating sick and old animals, predation actually strengthens the gene pool.

Richard Fiennes, the distinguished U.K. scientist and biologist has summed up the case for the wolf as follows:

'The wolf appears to retain a respect for human beings, and is reluctant to attack them. Not so man, who now fears and abominates the wolf and does all in his power to destroy him. Alas, he fails to recognize in the wolf's descendants, whom he has domesticated, the great virtues and loveable characters of the ancestral wolf. If wolves must become extinct in some areas, let us yet give what honour is due to him where we can. The old traditions of this gentle creature's savagery and ferocity linger on, and man's hand is against him, even when he does no harm. There are still enormous regions of the world, in America and Russia, where he can be left unmolested; let him so remain.'
The Order of Wolves, Richard Fiennes