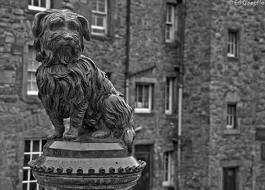 'Let his loyalty and devotion be a lesson to us all.'

The touching story behind the Edinburgh statue of a Skye Terrier called Bobby.

If you find yourself wandering about the Grassmarket part of town (just off the Royal Mile), look out for a statue of a cute little Skye Terrier. It resides on the corner of Candlemaker Row where it meets the George IV Bridge and is one of Edinburgh's most photographed attractions. The statue itself, sits on a plinth in front of Greyfriars kirkyard and a pub too ( you can't miss it for it is also called 'Greyfriars Bobby'). The story of Greyfriars Bobby has been known to reduce the burliest of characters to their knees in a whimpering state, so have a hanky ready.

This is a story which actually happened in nineteenth century Edinburgh. It portrays the touching relationship between one man and his dog. Wherever Auld Jock (real name John Gray) went, his canine best friend, Bobby, always followed closely behind. The two had only each other to rely upon and and a happy friendship developed over the years. All of a sudden, in 1858, tragedy happens when Auld Jock falls ill with tuberculosis and dies leaving Bobby all alone in the world.

Auld Jock was buried at Greyfriar's Kirkyard cemetery with nobody but the gravedigger and his faithful furry companion, Bobby, attending his funeral. There was a ban on dogs entering the cemetery and despite efforts to prevent him, Bobby would find a way to sit next to Auld Jock all day long.

During 1867, it looked for a while that Bobby, without an owner, would be removed from the streets and inevitably put to sleep. Thankfully, Edinburgh's Lord Provost, Sir William Chambers stepped in and paid for Bobby's dog license renewal, to which he became a ward of the city's council.

For sustenance during these long vigils he would receive a meal at the Greyfriar's Dining Room always at the same time, 1pm, every day. For fourteen years until his own passing in 1872, and every single day before that, Bobby could always be found at Auld Jock's graveside.

When Bobby died, he was buried beside the grave of his adored Auld Jock's having been awarded 'Freeman of the City' status. Having touched the hearts of all who knew him and his plight to watch over Auld Jock, Greyfriars Bobby was the only dog ever to have been awarded this. The Scotsman newspaper archives reveal the obituary of a certain little Skye Terrier on 17th January 1872.

There is now a statue in front of Greyfriars Kirkyard on which the following can be found:

"Greyfriars Bobby. Died 14th January 1872 aged 16 years old. Let his loyalty and devotion be a lesson to us all."