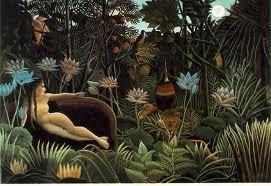 A few weeks ago there was a small stir of excitement in our area, which briefly lit up the gloom of our northern Scottish winter like the Northern Lights, which are quite visible to us at this latitude. Apparently a man - a Marine, no less - had walked, wearing nothing but a grin and a beard straight out of Lord of the Rings, from the south of England into Scotland, up past Loch Ness and the Highlands where I live, and on to the very northernmost point, John O'Groats - in winter. A Scottish winter, at that. I'm not sure where his starting point was but he must have walked about six hundred miles. Forest Gump would have been impressed. It was either a very brave, or foolhardy course of action, depending on your point of view but it certainly bought him his fifteen minutes of fame. There he was on TV, being carefully filmed from the waist up, the way they used to film Elvis Presley in the early days.

"Everyone", he said, "should be free to follow my example if they've a mind to". 'Not even as a joke', thought the whole of Scotland, 'and even less in winter' The police didn't see the funny side of it either. He was arrested five or six times and spent several nights in prison cells, covered by a blanket (the police's idea, not his). I remember scanning the local papers for the headline 'Man arrested for palely loitering', but it wasn't to be. I still think they missed one there.

He was certainly persistent. He finally arrived at his destination and no, he didn't throw himself off a high point into the North Sea, which some people thought (I won't say hoped) might be the logical end to his journey. As far as I know he got dressed, took a train to his hometown and quietly faded back into obscurity, leaving us with a memory, like the Cheshire cat's grin. All this was, I suppose, to make the point that he had the inalienable right to freeze anytime he had a mind to. Well, point taken, but this little saga set me thinking. Why have we never had our own coat, like other animals? 'But we do', I hear you cry, 'and anyway I'm not an animal'. Oh yes you most certainly are, Madam, and besides, I mean the kind of coat you're born with.

"Almost every animal, from a mouse to a moose has a coat. Ok, elephants don't, and maybe hippos, but I suppose they have extra thick skin to compensate. No, beyond dispute, we are the only animal that has to keep warm by getting dressed every morning by the fire. The reason we are coat-less seems fairly obvious. Didn't we start out under the hot sun of Africa, and so had no need of a natural coat? Hmm... then how about gorillas, who share 98% of our genes? They're pretty hairy, no question, so why didn't they shed their coat? You don't see them prancing about in their bare skin? Alright, let's try it from a different angle. Why did we move out of Africa? I have a theory. Suppose the other animals started snickering behind their paws as they watched us tottering around on our spindly legs? Or maybe we just thought we detected a sardonic look or two. No, really, I'm serious. Anybody who's ever played tag with a dog in the garden knows how clumsy they think we are. Just watch as Bracken feints to the left and then effortlessly switches direction in mid-stride as Master sprawls into the rose patch. And they're our friends.

We all know the human race is notoriously sensitive to criticism, and I don't suppose the animal kingdom took us very seriously before we equipped ourselves with guns, boots, landrovers etc. Perhaps a few of the more vulnerable and touchy families got together one day and decided to head out for colder climes, where it would be possible to dress up and hide their bony knees without feeling they were being stared at. I read somewhere that the whole population of northern Europeans could be traced back to about five gene types (genotypes?). If I understand this right it means that around five families were responsible for the diversity of virtually the whole of Western culture from Boadicea (Boudicca to Guardian readers) to George Bush. Nepotism on a grand scale. So, bearing this true and staggering fact in mind, my theory about our neurotic ancestors could account for a lot of things, couldn't it?

What do you mean, 'In a pigs eye'? Don't you know people laughed at Darwin when he brought out his theory, and they would certainly have done the same to Einstein if they'd understood what he was talking about? Anyway, if I'm right, my idea throws some light on seemingly irrational activities like war, mud wrestling and round-the-world yacht racing. A large claim, you may say, but consider; those pioneer Europeans who came trudging all the way from the plains of Africa (I seem to recall reading in a book by H.G.Wells that they came from India, but I'll think about that tomorrow); these hardy pioneers, like so many Pilgrim Fathers searching for a new horizon, went to an awful lot of trouble just to soothe their wounded dignity and avoid ridicule. (Remember? They were laughed out of Africa? - try to keep up, it all fits).

Now, does any of this seem familiar? You betcha. It's the M.O. of just about every politician you ever heard of. One imagined slight and you have shoes banged on conference tables, and sanctions applied at the very least, and at the worst - well, you know what I'm saying. And there you have it. These are the same guys who led us out of swampy old Africa in the year dot - give or take a couple of millennia. Neat theory,eh? Better than the string theory. I wonder why nobody ever thought of it before? It's a pity though, that it doesn't seem to have any practical application. I mean, you couldn't gather up all our leaders and put them back in the African veldt. Could you?

As for our friend the intrepid Marine, who trekked all the way up north in his birthday suit - he's done Scotland; maybe he should try Africa next...