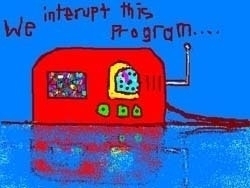 In 1938 Orson Welles produced a version of War of the Worlds by H.G. Wells (no relation), for an American radio station. His company, Mercury Theater, had already dramatised several books, such as The Count of Monte Christo and Dracula, but now Welles decided on a new approach.

At this time radio was still a new and powerful medium. The big radio networks such as CBS and NBC had only been going for about ten years. These were nervous, jumpy times. Storm clouds were gathering over Europe, as Churchill put it. Britain was less than a year away from the most desperate fight for survival in its long history, and most Americans felt that sooner or later they would be involved, too.

Americans were becoming used to dramatic stories unfolding on the radio. In 1932 came the first live broadcast from an actual war zone, when a reporter brought the sounds of a real battle from Spain into peoples homes. Then there was the mystery of aviator Charles Lindbergh's kidnapped baby son, which dragged on for several months. To this day there are some unanswered question connected to this case. In 1937 there was the fatal crash of the airship Hindenberg, described by Herbert Morrison, of Chicago station WLS, in a recording put out the next day. "Oh, the flames, four or five hundred feet in the sky, it's a terrible crash, ladies and gentlemen. The smoke and the flames now and the frame is crashing to the ground, not quite the mooring post. Oh, the humanity and all the passengers", he says, before breaking off for a few minutes, overwhelmed by the horror of it.

It was at this edgy time that Orson Welles hit the airwaves of America with his new production. Welles had updated the story from its cosy late-Victorian English setting to contemporary New Jersey, and he presented it as a series of increasingly apocalyptic news reports. Listeners settling down to what they thought was a program of dance music suddenly heard it interrupted by a report of several explosions of 'incandescent gas' on the planet Mars, followed, after a few more minutes of music, by an interview with a 'professor' at Princeton Observatory, assuring everyone that there was nothing to worry about.

From here the story gets wilder, as reports start to come in of a Martian invasion in full swing. The Martians had landed, for reasons best known to themselves (and Welles), at the sleepy rural hamlet of Grovers Mill, and were deploying in the direction of New York City, spreading death and destruction as they advanced. The realistic effect was enhanced by the use of genuine place names along the route.

The result was more startling than anyone, including Orson, could have predicted. As it happened, about half the audience tuned in late that night, and so missed the brief introduction, explaining that it was only a radio play that they were listening to. Thousands of people panicked. The roads became blocked with people and cars. Some people hid in cellars, some wrapped their heads in wet towels to escape the poisonous gas, some grabbed their guns, declaring they were going to help defend Grovers Mill.

The public services were swamped. A man phoned the Bronx Police Headquarters and told the cop on the desk, "They're bombing New Jersey!" "How do you know?" enquired patrolman Morrison. "I heard it on the radio. Then I went to the roof and I could see the smoke from the bombs!"

It would be a cheap response to laugh at the unsophisticated reaction of those Americans, nearly seventy years ago, as they confused science fiction with reality, but in those anxious days, who knew what might be possible? Afterwards, Welles claimed it had not been his intention to cause mass panic, and there is no reason to disbelieve him. All the same, he must have known he was tapping into a well-established fantasy.

The fascination with off-world activities goes back a long way if you think of the Greek gods as the first space travelers, and Icarus was an early fatality when he flew too close to the sun with his wax and feather wings, after having been warned against it by his father, Daedalus. As we all know, the wax melted and he fell into the sea...

Science fiction in its modern form began with Jules Verne and H.G. Wells. In From the Earth to the Moon, which was written as a kind of travelogue, Verne has his space capsule with its three man crew, fired at the moon from a cannon. This story influenced most of the original space pioneers. Although not as highly educated as H.G wells, he used real engineering analysis to arrive at the design of his cannon and manned moon projectile, and at the time of the Apollo missions it was recognised that he made a number of correct engineering predictions.

Sci-fi literature really took off in the '50's and '60's. C.S.Lewis wrote his 'Interplanetary trilogy' in 1953; Voyage to Venus, That Hideous Strength and Out of the Silent Planet. These had a strong Christian and moral theme. Lewis, originally from Ireland, moved to England and eventually became an Oxford don, so it's understandable that his fiction was a bit shaky on the science. But he was an exception. Many sci-fi writers of the time were either scientists, engineers or mathematicians, sometimes all three. Robert Heinlein, Isaac Asimov (I, Robot) and Arthur C. Clarke are just three of many that come to mind. Ray Bradbury is in a class by himself, for his beautifully crafted, poetic images of lost and crumbling civilizations on the Red Planet.

Today there is less distance between science fiction and science than there used to be. Arthur C. Clarke is so well respected in scientific circles that he has had several craters named after him on the moon. Many of Clarke's ideas have been used by space engineers. For example, in 1963 he wrote a story called Windjammer, or The Wind from the Sun, in which space vehicles had enormously wide sails, made of extremely thin material. The idea was that they were propelled between the planets by 'solar winds', or pressure from the sun. The acceleration rate would be small, but a craft would eventually attain speeds close to the speed of light, using no fuel at all.

I read some time ago that the Russians had taken up the challenge and were building a space ship based on Clarke's idea. As I write, this vehicle has just failed to launch, due to the failure of the initial rocket stage, not the space wings themselves, but such is the interest in Clarke's concept, that there are programs being prepared in the US, Japan and Europe.

Another of Arthur C. Clarke's ideas was that of a tower stretching into space, as a kind of docking point for space ships. This idea is also receiving serious consideration.

NASA's business-like approach to the exploration of space from the '60's on has taken some of the mystery away from local space travel and has affected the popularity of sci-fi literature. The emphasis has shifted to films. Again Arthur C. Clarke showed the way with the classic 2001. Since then we've had Star Wars, Close Encounters, E.T., Alien, Independence Day, and of course, Star Trek. I should also mention Contact, the book and film by Carl Sagan, a scientist and writer who left us way too soon. He was largely responsible for NASA's search program for extra-terrestrial radio signals. And now, just to come full circle, we have a re-make of War of the Worlds...

Seventy years on, it's true that we couldn't be fooled by Welles' radio play, but technology is moving at such a pace that we are not really sure anymore, what is possible and what is not. Anti-matter, anti-gravity, charm particles, alien abduction, bring it on - the truth is out there. Personally, I won't be surprised when they discover a way to travel faster than the speed of light. Warp factor two, Mr. Sulu, and straight on til morning.