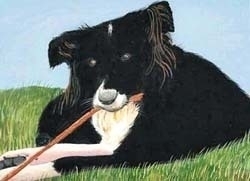 What is this talent for invention that the Scots have? We all know that the Industrial Revolution would never have got started without Robert Thomson and John Dunlop, who both invented the pneumatic tyre - not together, you understand, but forty years apart. (Where else in the world would the same thing have to be invented twice because it was forgotten about the first time around?). As if that wasn't enough, Thomson also invented the fountain pen. Then there was James Watts' steam engine, McAdams' road surface and - well, no need to go on, the point is made, I think; without this steady stream of genius from the northern part of our island, we might still be jogging along the roads in horse-drawn buggies.

No bad thing, some would say, but that's another story. However, there is one branch of Scottish inventiveness which is sometimes overlooked, and that is Scottish dogs. Some of the breeds which originated north of Hadrian's Wall (more or less) include Skye Terrier, Gordon Setter, Border Terrier, Cairn Terrier, the ubiquitous Westie and Queen Victoria's favourite, the Rough Collie. But the dog which forever and aye means Scotland to people around the world from Europe to the USA, Australia to New Zeeland, and for all I know, China, is the Border Collie.

I've admired the B.C. since I first came across 'Black Bob' in The Dandy, many years ago. Collies are not for everyone. They are special and they know it. It may take a while for the two of you to establish who owns your home, but once he's trained you he'll give you the run of the place, and as long as he gets plenty of exercise he'll treat you fairly. It seems as if I've always had dogs around; in my work as a pet portrait artist, under my feet or occupying my favourite chair at home. And also in memories stretching way back into the mists of time, by which, for the curious and the literal, I mean the sixties.

The first dog I can remember as a toddler was called Bonzo (yes, well, I told you it was a long time ago and I think it was probably quite a fashionable name at the time). He was a mutt, no doubt about it; brown, white and orange, and I used to sleep on the stairs with him. Then came Jock, named after my father, who didn't live with us at the time. He had a rough coat, and I suppose was part terrier (no, not my dad, please concentrate). Later, when I had my own dogs, there was Snooky, who was a collie with a terrier head, then Gub-Gub with the beautiful tail, named after Dr. Doolittle's pig because I liked the name. She was actually a Welsh Collie, fast and slim, and nothing like a pig.

Then there was a Labrador cross, also called Snooky. My wife was for calling her Lib-Lab but I vetoed that. Keep politics out of the kennel, I say. And finally there came Snooky's favourite daughter Bugle (loudest in the litter) and little scruffy Pebbles, who was really my wife's dog. The last two are still with us. So you can see that I know about dogs, or so I thought before we acquired Patch.

Patch is a Border Collie. He is not aggressive; in fact he is very lovable and quite gentle with our other two dogs, as long as they know who's the boss and as long as they do as they're telt, and fast, like. Ken? (Well, he is a Scot!). I have to admit that Patch is a puzzle. If he doesn't want to do a thing, he won't. It's as simple as that. He can't be tricked, flattered or scolded into doing something, because he's not that easily impressed.

But there are ways to manage him. If you want him to follow you; walk away. You know, like the Horse Whisperer. It's not because he doesn't relate; he really loves us and he is obedient in his own way. He will sit, go down, give either paw and 'talk'. He just doesn't see the point of doing something he doesn't want to, all right?

He has plenty of the legendary energy and intelligence of the finest sheepdog in the world. I usually take a tennis racquet and ball on our walks in the woods to try, in my optimistic way, to tire him out. We live in a hilly, and fairly wild part of the Highlands, and I only have to say to him, "Patch, that way", or even just point, and he'll be there, waiting for the ball, whether it's up the brae or across a burn.

And yet, for all his intelligence and boldness, he is sensitive and easily frightened. At the first hint of a raised or angry voice (it wouldn't be mine, you understand), he goes to pieces and hides...

Yes, our boy is difficult at times, but always fascinating, and I don't have to tell you that we love him to bits.

He was a gash and faithful tyke
As ever lap a sheugh or dyke;
His honest, sonsie, baws'nt face
Aye gat him friends in ilka place.
His breast was white, his towsie back
Weel clad wi' coat o' glossy black,
His gaucie tail wi' upward curl
Hung o'er his hurdies wi' a swirl.
*The Twa Dogs
Robert Burns*


Six months ago my Patch died, and I have to learn to get along without him. I now have a Border Collie pup crossed with Something Else. He has none of the nervousness of Patch. He is a friend to all the world. And yet...and yet...If he doesn't want to do something...
We do not forget, but we move on.