Do You Ken John Peel? A Scottish Essay 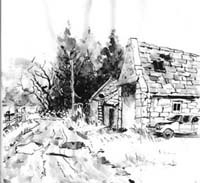 When my daughter Abi turned thirteen, some seven years ago (where does the time go?) she decided, as head of the family that it was about time her parents became vegetarians. She has been a convert, with occasional lapses, for around two years. I was certainly not against the idea. We hardly ate meat anyway; just the odd bacon sandwich and an extremely rare steak (rare in the numerical rather than the French culinary sense), but it would be good to lose that feeling of guilt experienced when a cow looks at you over the fence with those mournful eyes.

Actually the cow is not at all sad - she's probably wondering if you are going to pass her some of that long green grass on the other side of the fence, but the guilt is real enough.

Of course, not everybody feels that way. In another life I used to be a musician and I remember driving to a gig with a black American blues singer called Johnnie Mars. I pointed out some ducks which were flying low over the band bus in formation. Johnnie looked up and said yep, he thought they were mighty fine, and after a moment, 'Especially with roast potatoes'.

This was said without a trace of irony. He told me later, with the same straight face, that he was well known in East Poland and Latvia, which reminded me irresistibly of Dorothy Parker's line about being famous in two continents - 'Greenland and Iceland'.

Anyway, as I said, I'd like to become a vegetarian, but I think you have to pick the right time. It's like giving up smoking, something I finally managed to do ten years ago after many attempts. One day, all the conditions were right and I stopped, just like that.

That's how I imagine it would be when giving up meat, although as far as I know, meat is not addictive. There'll be no retrievals of half used packs of bacon from the bin, or furtive trips to the corner shop, ('Just going to take the dog around the block, dear. Won't be long').

These ruminations (isn't that what cows do? - Ed) were brought on by the fact that we've recently moved house. We're now twelve miles further north and within sight of the Moray Firth. (In Scotland an estuary is called a firth, so for example we have the Firth of Forth - see?). Anyway, in those few miles, we've moved out of the Highlands and onto the coastal plain, which drops gently down to the sea, about six miles away, giving us a clear view of the few solitary cottages and farmhouses in the area, plus the remains of Duffus castle and the Lossiemouth lighthouse.

All this is very different from the Highlands, with its hills and valleys, rough ravines and forests. Almost a different country, almost a different people. Before the Jacobite uprising in the 18th century and the subsequent destruction of the Scottish clan system, the 'wild, wykked hieland men' used to swoop down onto the coastal plain, steal all the cattle they could cope with, burn a few cottages and disappear back into the hills.

Well, the clans are no longer a force, and instead there are large shooting estates, sometimes owned by old established families and sometimes by wealthy newcomers. Clients pay the equivalent of the price of a good second hand car for a few days shooting. We used to live in a farmhouse right in the middle of one of these estates. Pheasants were as common as pigeons and sparrows are in town. It was not at all unusual to see two or three elderly gents stroll past our house, stepping stiff-legged over barbed wire fences (ouch), with their broken shotguns cradled over one arm and their labradors at heel.

Now, you might think I'm out of sympathy with the hunting fraternity, and you'd be right, up to a point, although it's true I did a lot of fishing in my early teens, and I once owned a beautiful .22 BSA air rifle with an oiled stock and a rifled barrel. I gave up fishing when I discovered girls, and I exchanged the rifle for my first guitar and never looked back.

As a young teenager, part of my reading was about the safari hunters of Africa and India, last of a dying breed. One of the most interesting of these was Jim Corbett. He became well known as a writer and his best book was probably 'The Man-Eaters of Kumaon'. He had respect and even love for the man-eaters that he had to shoot. He was not just a hunter; he was also a naturalist and an early conservationalist, who warned against 'the indiscriminate hunting of the tiger, which if not controlled would eventually deprive India of the finest of her fauna'.

About this time I discovered two great American writers; Hemingway via 'The Green Hills of Africa', written in 1933, and William Faulkner through 'The Bear'. Written in 1942 as a long short story, 'The Bear' is Faulkner at his prophetic best. It's about a group of men and boys who go on a hunting trip every year', and each time they have to drive further to find the wilderness as the Mississippi Delta shrinks. At the time the story was written, conservation was not at all fashionable, nor was it twenty years later when I read it, but it made me realize that there could be a link between hunting and conservation.

I have no desire to hunt or shoot any animal, but I'm hardly in a position to criticize anyone else while I still eat meat. The arguments in favour of hunting are not easy to refute. For instance, it's claimed that without foxhunting, farmers would quickly eradicate the fox and that in Scotland the Red deer population would soar without adequate control.

Maybe, but I can't help thinking Oscar Wilde got it right when he wrote about 'The unspeakable in pursuit of the uneatable'. Besides, as a solution to the deer population problem, I'm for the re-introduction of the wolf, absent from the Scottish Highlands since before Bonnie Prince Charlie went home to Italy. This is a serious and considered proposition, now championed by the Green Party, and it feels right to me. It works in Montana - why not here in the Highlands? In the meantime, at least I've moved out of earshot of the shotguns on the estate.