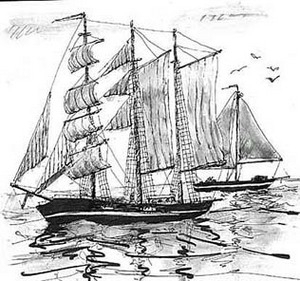 'Will you remember the famous men
Who had to fall to rise again
Pick yourself up...
Take a deep breath...
Dust yourself off
And start all over again.'
Jerome Kern 1936

When C.S. Forester published the first of his novels about the life and times of Horatio Hornblower in 1937, he virtually created a new genre. 'The Happy Return' ('Beat to Quarters' in the U.S.) was an instant success and was later made into a film starring Gregory Peck and James Robertson Justice (1951). Forester wrote eleven novels and five short stories about Horatio Hornblower R.N., charting his career from midshipman and lieutenant to Admiral of the Fleet and Lord. He was a successful writer quite apart from the Hornblower series and several of his stories have been made into films; 'The Gun', set in Spain at the time of the Peninsular war and starring an unlikely Frank Sinatra and Cary Grant, and a very likely Sophia Loren; 'The African Queen' with Humphrey Bogart and Katherine Hepburn; 'Brown on Resolution' and 'Payment Deferred'.

Forester's first brush with Hollywood was in the 'thirties when he went there to work on a pirate film under the name Arthur Hornbow. Unfortunately, before he finished the script another studio released 'Captain Blood', starring Errol Flynn, and using the same historical incidents he had counted on, so the film was abandoned. At the start of Word War Two Forester persuaded the British government to let him go to America to write propaganda (news, film, short stories and novels), to help with the war effort. For the rest of his working life he lived in Berkeley, California. He became partly crippled in 1943. Altogether he wrote thirty-five novels, two plays, five biographies, three children's books and some history. He died in 1966 at the age of 67.

There is no doubt that what he is best remembered for is the 'Hornblower' series. There are now several good authors writing naval stories set in the Napoleonic Wars; Alexander Kent, Dudley Pope and Patrick O'Brian, but Forester was the first, unless you include 'Mr Midshipman Easy' by Captain Marryat, written in 1836. Marryat served as a midshipman under Thomas Cochrane, of whom more later.

Forester gives Hornblower a subtle and complex character; self-doubting and yet outwardly decisive, humane and a loner, a believer in authority with a progressive outlook. In all the stories the historical references are accurate and the period naval detail is convincing. Towards the end of the 18th century and the start of the 19th, the time in which these stories are set, warships had become beautiful, incredibly complex and deadly floating castles. HMS Victory, Nelson's flagship at Trafalgar (commissioned in 1776, it is the oldest warship still in service, and is permanently docked at Portsmouth, Hampshire) was over 200 feet tall from the waterline to the top of the main-mast and mounted 104 guns on three decks. The top deck carried 12 pounders, the middle deck 24 pounders and the massive 32 pounders were mounted on the lower deck. A ship of the line like this would have needed a high degree of seamanship and skill from the officers and men and in particular the captain.

Unlike the real Horatio Nelson, the exploits of the fictitious Horatio Hornblower do not take place in the great set-piece sea battles of the time. Hornblower's success is usually due to his use of a clever ruse or unexpected stratagem. Forester has him sent off on lone missions and desperate adventures involving finesse and diplomacy as well as courage and seamanship, as he deals with island governors and presidents of small South American republics etc.

Great adventure stories, as long as you suspend your disbelief. The kind of devices used in these stories would never actually work. Being the captain of a warship, even in those romantic times would have been more prosaic than Forester makes it out to be. Anyway, that's what I thought until I came across the source of Forester's creation - the real Hornblower.

Thomas Cochrane, son of the 9th Earl of Dundonald, was born in Lanarkshire, Scotland. As a child he was fictitiously listed as serving in the Royal Navy ship commanded by his uncle, Sir Alexander Cochrane, but actually signed up in 1793 at the comparatively late age of eighteen to HMS Hind. He made rapid progress in the next seven years, in spite of being court-martialled for disrespect to a senior officer. His impulsive nature and candour would eventually lead him into real trouble with the establishment.

In 1800 he found himself in command of the sloop 'Speedy'. During his time with this vessel he accounted for more than fifty enemy ships in the Mediterranean. Napoleon called him "le Loup de Mer" (the Sea Wolf). In 1801, with his tiny 14 gun sloop he captured the 32 gun Spanish frigate 'El Gamo'.'El Gamo' had been sent by the Spanish to capture and destroy Cochrane and the 'Speedy'. A month earlier the Spanish frigate had very nearly achieved her objective when she lured 'Speedy' into hailing distance and suddenly opened her gun ports.

Since Cochrane's sloop was massively out-gunned he had to think fast to avoid disaster. He had the Danish flag hoisted, and strutted about wearing a Danish uniform and gabbling away in 'Danish'. When the Spanish sent an officer across in a boat he was informed that the 'Danish' ship had just come from the plague-ridden Barbary Coast of North Africa and if they wanted to stay healthy they had better keep their distance. And so the two ships parted company. About a month later 'Speedy' came across 'El Gamo' again, off the coast of Barcelona, and Cochrane decided to take her as a prize.

There was a 45 minute fire-fight in which 'Speedy' lost three men killed and five wounded. Cochrane then ran the two ships together and led a boarding party onto 'El Gamo'. This was the last thing the Spanish expected since 'El Gamo' carried a crew of 319 men, compared to 'Speedy's' 50. In the thick of the fighting Cochrane hailed his own ship and ordered another 50 men to be sent over. In fact he only had 3 men left on board but the Spanish were convinced that British re-inforcements were about to overwhelm them and soon surrendered. As a result of this action Cochrane was promoted to Post Captain.The story of Cochrane and HMS Speedy formed a large part of the plot of Patrick O'Brian's novel 'Master and Commander', which was recently made into a film starring Russell Crowe.

After leaving 'Speedy' Cochrane served in 'HMS Pallas' and later 'HMS Imperieuse', wracking up a fortune in prize money for himself and his crew. In 1809 he led the hazardous fire-ship attack on the French fleet in the Aix Roads near Rochefort. The mission was a success and most of the French ships were driven hard on the shore, but Cochrane felt he could have destroyed the fleet completely, and perhaps shortened the war if he had received proper backing from the British commander-in-chief Lord Gambier. Gambier was court-martialled as a result of Cochrane's criticism, but was acquitted.

For some years Cochrane had somehow found the time to manage a political career in tandem with his navy activities. He had long been a campaigner for liberal reform both in the Navy and in Parliament, but now things started to go wrong. The same qualities that made this 6'2" Scottish captain, with his shock of red hair and his outspoken opinions such an excellent commander proved to be something of a liability in the rarefied atmosphere of Westminster. Lord Gambier was now his enemy and Cochrane's criticism of the conduct of the war and his fight against corruption in the Navy made him some powerful establishment enemies.

These took their revenge when Cochrane was accused of taking part in a sensational stock exchange fraud, based on false rumours about the abdication of Napoleon Bonaparte. Nobody today believes that he had anything to do with the fraud; even at the time the general public, with whom he had always been popular, thought he was innocent, but in a travesty of a trial he was convicted and fined £1000. He was also sentenced to be pilloried for a few hours, jailed for a year and expelled from Parliament. Cochrane escaped from prison, was re-captured and fined a further £1000. Owing to a public outcry the government backed down, and he was given a Royal Pardon.

At this point you have to wonder just what it would take to defeat this fiery, rumbustious Scot. He seems to have had an inexhaustible supply of energy and self-belief. Still protesting his innocence and in official disgrace, Thomas Cochrane now took his child-bride, Kitty, (whom he married in 1812, 1818 and 1825) and left for South America, much to the relief of Westminster and the Admiralty. He was not running away; he had been invited to command the Chilean navy in its war of independence against Spain (1817-1822), and also help to found the navy of Peru. Later he took command of the Brazilian navy in its war of independence against Portugal. As if that wasn't enough he then spent three years in charge of the Greek navy in yet another war of independence, this time against the Ottoman Empire (1825 - 1828).

Finally he returned to England, some eleven years after leaving in disgrace, to find that with a different government and the passage of time, everything had changed. His achievements were now acknowledged; even by the Admiralty, who called him "The greatest man afloat". At this time he succeeded to his father's title as the 10th Earl of Dundonald. He was re-instated into the Royal Navy and was made an admiral.

At age 73 he commanded the Royal Navy's North American station and at age 79 applied for command of the British fleet during the Crimean War. He was turned down because of his age. He died at the age of 85 and is buried at Westminster Abbey. Two centuries later we can still see in Lord Thomas Cochrane a courageous, liberal-minded man with a unique and inventive mind, who never knew when he was beaten. In Scotland the country's greatest naval hero is almost forgotten, although the naval base at Rosyth in Fife is called HMS Cochran. Oh yes, and there is a plaque to his memory in Anstruther.