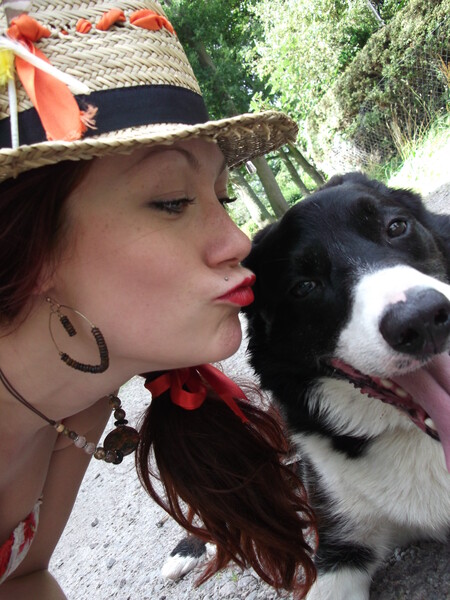 This is really chapter two in my story of dogs we have known and loved. The first chapter ended in 2003 on a note of hope and renewal after losing my darling Patch much too early. He only lived three years. He was a beautiful but troubled border collie. I loved him dearly but in the end, as the Americans say, I had too let him go. I don't want to go into it because it's still too painful, but certainly I couldn't control him and I'm not sure anyone else could.

Dog lovers are a breed. Rudyard Kipling knew that when he warned:-

_' Brothers and sisters, I bid you beware
Of giving your heart to a dog to tear'_

Taking no notice whatsoever of Kipling's advice, we were soon on the lookout for another collie, and it wasn't long before I saw a six-montjh old pup for sale near Balmoral, an hour and a half drive away. He turned out to be a real farm collie, all-be-it a short-haired one. The owner, a young mother, had been driven to distraction by his constant barking. His name was Oscar, and of course we took him on. As we drove away with our new pup in the back, I waved to his ex-owner and I remember her air of sadness mixed with relief as she stood at her door, waving back..

In the next few weeks he seemed to bark non-stop, and my wife said I should take him back where we got him. I didn't really want to, and to my relief, when we phoned his ex-owner, she said she didn't think she could have him back. She had some reasonable excuse, which I can't remember now, but I was secretly pleased, and we never regretted it!

We never really taught Oscar tricks. He taught himself to 'sit' once he realised it was cute, and it might earn him a biscuit or a word of praise. He wasn't wild like Patch had been, although he could be stubborn if he felt like it. He was sweet and gentle. I once watched him dig a fieldmouse out of it's burrow. He carefully lifted the astonished rodent by it's tail and laid it on the grass, before trotting back to his equally astonished owner, me. He looked at me as if to say, 'job done, what's next?' and we continued on our walk.

We lived, then, near Elgin, next to a vista of fields stretching down and away towards the Moray Firth. On our walks Oscar used to disappear for up to a half hour at a time. I never worried, well, not much anyway, because I always Knew he would come back. except for once when he was still missing as it got dark. Our cottage was only a couple of minutes away, so I took our other two dogs home and came back out with a torch to look for Oscar. By this time it was nearly dark and of course I was seriously worried.

I called and called and eventually I heard a forlorn little bark. After stumbling across a number of ditches etc, I caught him in my torchlight. He was sitting calmly waiting for me, and around his neck was the snare of a rabbit snare. If he had moved he would have been garroted, but something must have told him to keep still. I was so relieved and at the same time angry, that I broke the snare into little pieces. Next day I took the pieces to the local police station and filed a complaint. The police didn't seem very interested and I never heard any more about it.

Shortly after the rabbit snare incident, we moved to our present house in the small, mainly stone village of Dyke. 'Roselynn' is a large, four bed house in Main Street. It's the only street, apart from a little side street wonderfully named Dark Lady Road. Someday I'd like to research the council official who, in the distant past, named our only street 'Main Street' and lay a flower on his grave. Our village has no yellow lines, no traffic lights and no shops. The old folk around here tell me there used to be a shop once. Yeah right, and Nessie is alive and well and living in the Moray Firth.

Anyway, back to the story. I haven't mentioned Lucy yet. We wanted a dog to replace Pebbles, my wife's scruffy little terrier, whom we bought, with a complete set of fleas, from a from a gypsy camp, but that's another story. Just as we did with Oscar, we found ourselves heading out into the sticks, looking for a little farm. The farmer had put an ad in the local paper, saying his collie/lab bitch had one pup left. Eventually we reached the farm and found the pup living with her mother in a wheelbarrow. Yes folks, a wheelbarrow. I felt a little guilty for taking her away from her mum. I hope her ma felt relieved of her burden, but I don't really think so.

What can I say about Lucy? She was gentle, loving and funny. She was rarely seen without a ball in her mouth. She had the shape of a lab and the mind of a collie. Of course we loved all our dogs, but if we had to chose just one, I think it would have to be Lucy. She was with us for 14 happy years and died in my arms six weeks ago.

When Oscar passed, a couple of years ago, the girls didn't seem to grieve like we expected them to, maybe because they still had each other, but they certainly lost some of their easy confidence on walks, and became more nervous if other dogs were near. In any case, who am I to say they didn't feel it when their leader and protector passed out of their lives? Lucy has now gone too, but I know she and Oscar both had long, happy and healthy lives, so I am content.

So, what about Lily? Is she grieving for her parents? Don't think so, although she has definitely grown closer to Karen and me. She's still the baby. It's hard to remember that she's now twelve years old. She still looks, acts and probably thinks like a puppy. Smallest of the litter she may have been, but she is still fit, perky and forever innocent.

I mentioned earlier Kipling's lines about 'Giving your heart to a dog to tear'. He knew, as all animal lovers know, that our pets are only lent to us, that there is a price to pay for the privilege of sharing your love with a dog or cat. It's just that it's payable at the end, not the beginning. Take heed, my Brothers and Sisters.