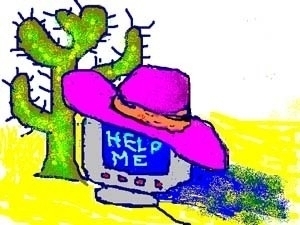 A few weeks ago I received an email from the ISP company that I used to use. For those who don't know what that is, it's a company which hosts websites. This particular organisation is very large and very well known, and this is the story of why I don't use them any more. I'll call the company 'Wahoo!' The email from them was to the effect that due to an error on their part, Wahoo! had not been billing me for the last six months. Since the fault was theirs they were going to cut their losses and not charge me.

Very civilized of them to write off the back-payments like that, I thought, and then I forgot about it for a week in my usual efficient manner. After all, we were only talking about a few dollars a month. A week after the first bland and kindly email another one came. No more Mr Nice Guy. This one announced that Wahoo! intended to delete my site in three days, and would I like to back up my files? Ok, I thought, no problem. I should have backed up my files some time ago; this would teach me a lesson.


It was only when I sat down to begin saving my pages that I realized I didn't know how to do it! I called in a friend who was attending an evening class in computer maintenance, and he couldn't do it either. I should explain here that I started my website some years ago and there were now 112 pages on it. Some of these were link pages and some contained only one image (enlargements of smaller images), but still - a lot of pages, all created by me in HTML. Again, if you don't know what that is, well, you're probably better off not knowing. Let's just say the words blood, sweat and tears come to mind...

Having begun in complete ignorance I'd like to think that now I'm almost an expert in designing web pages, or at least my own pages, although I'm not sure I would have started at all if I'd known how much work was involved. On the other hand I'm not so good on the basic, ordinary computer operations, as I was finding out.

By this time the cut-off point was just two days away and it was the week-end, as it always is when the ship starts to sink. I now pressed the panic button. You know when Ripley clicks home the detonater in 'Alien' and the klaxon starts up, the ship fills with steam and that annoying 'speaking clock' voice starts to count down the seconds? That was me. (Nobody can hear you scream in your computer room). At least Ripley had a gun the size of a small car to give her confidence. Anyway, I finally managed to find a professional who was willing to give up his week-end to help out - for a price. Even he took a day to figure out how to save my pages.

I'd never phoned Wahoo! before but now I thought I ought to contact them to explain that I'd been working on my site for two years and surely it would be better for them to keep my domain open and just accept a payment from my visa card.
For some reason I'd always thought Wahoo! was in California, perhaps Silicon Valley, but they turned out to be in Texas, which I suppose explains why they call themselves Ya... I mean Wahoo! Anyway, after I'd tapped in the usual half-a-dozen choices via my phone keys, I finally got through to the right department. The girl on the line was pleasant, helpful and informative. She even told me that it was raining in Texas. I said I didn't think it ever rained in Texas and did she know that Dallas was named after the little Scottish village (pop. 200)I used to live in? She said no, but she thought Houston was named after Sam Houston.
That was really the high point of the conversation. She finished by saying that my site was due to be axed in twenty-four hours and that, much as she regretted it, there was nothing she or anybody else could do about it. However, I was welcome to upload as many pages as I liked after I had re-registered, and have a nice day.

Well, I know when I'm beaten. I could feel the weight of a mighty corporation behind her words, like you do when a policeman pulls you over. Ok, I thought, let's try a small company, and why not one that's a little closer to Scotland than the Lone Star state. I finally chose one in England. I explained my problem on the phone and the guy said they had a very efficient, friendly service, so I paid my subscription and signed up.
Meanwhile Ya... I mean Wahoo! had re-installed my site address, minus the contents, so I now had two websites - both empty. Yep, looked like it was gonna be a long, hard winter.

And that, folks, is the story of how I finally saw the light and stopped banging my head against the wall. Herd 'em up, move 'em out - Yahoo!